Gyro/IMU/INS are measurement equipments to navigate, guidance, stabilization and pointing in many field of application:

Gyroscopes are essential for navigation, guidance, and stabilization and/or pointing of many manned and unmanned systems designed for commercial, industrial, and military applications. From game controllers to smartphones, and from remote stabilized weapons to driverless vehicles, gyros and inertial measurement units (IMUs) perform a number of vital navigation, guidance, and positioning functions within these systems.

With the tremendous variety of applications comes an equally wide array of performance grades in gyros and IMUs. Consumer grade gyros such as those used in video game controllers, smartphones, tablets, and automobile airbag systems exist on the low-end of both performance and cost. More demanding applications such as weapons systems, driverless vehicles, and navigation in GPS/GNSS-denied environments require a much higher grade of performance. The performance capabilities and accuracy requirements determine which technology is integrated into a specific system.

Gyro and IMU accuracy can be roughly divided into performance grades according to bias stability specifications, with the lowest grade being used for consumer products, and the highest performing grades being used for mission critical strategic applications. A bias stability measurement tells you how stable the bias of a gyro is over a certain specified period of time. In general, the lower the bias stability the lower the errors will be when integrating the gyro output over time. A gyro with lower bias stability will lead to lower errors in position estimates for an inertial measurement unit. As might be expected, the performance grade of a gyro or IMU also determines its comparative cost.

The intended application is also an important consideration when evaluating gyro performance grades. Lower performance gyros such as quartz and silicon MEMS gyros are typically used in consumer, industrial, and tactical grade applications such as smartphones, smart munitions, and tactical mid-course guidance. More precisionoriented applications such as torpedoes, air/land/sea navigation, geo-referencing mapping and surveying, and autonomous surface or subsurface navigation require performance grades found in high performance FOGs, ring laser gyros (RLGs), and mechanical gyros. For the purposes of this paper, we will focus on fiber optic gyros and micro-electro-mechanical systems gyros. 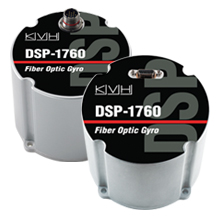 Visit the section Applications to learn about the fields of application.